The Garden of E...
Hieronymus Bosch

The Closing of ...
John Ottis Adams

The Death of th...
Caravaggio

The Fanatics of...
Delacroix 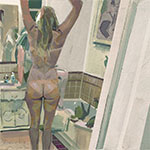 Windmill on the...
Ivan Aivazovsky

Şiir Başlığı: A Radio With Guts

Özet:
it was on the 2nd floor on Coronado Street
I used to get drunk

A Radio With Guts

it was on the 2nd floor on Coronado Street
I used to get drunk
and throw the radio through the window
while it was playing, and, of course,
it would break the glass in the window
and the radio would sit there on the roof
still playing
and I'd tell my woman,
"Ah, what a marvelous radio!"
the next morning I'd take the window
off the hinges
and carry it down the street
to the glass man
who would put in another pane.
I kept throwing that radio through the window
each time I got drunk
and it would sit there on the roof
still playing-
a magic radio
a radio with guts,
and each morning I'd take the window
back to the glass man.
I don't remember how it ended exactly
though I do remember
we finally moved out.
there was a woman downstairs who worked in
the garden in her bathing suit,
she really dug with that trowel
and she put her behind up in the air
and I used to sit in the window
and watch the sun shine all over that thing
while the music played.